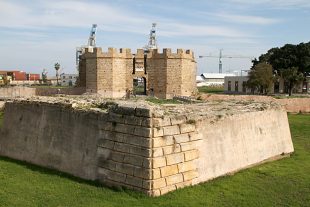 The Castello a Mare doesn’t look like much from the bike path; just a collection of ruins. But once inside the gate, the scale of the former castle is striking. The date of its construction is unknown, but estimated to be around 1150. For 750 years, it was one of Palermo’s most important lines of defense against pirates and invaders. And during the Spanish rule of Sicily, it served as the seat of the Holy Inquisition.