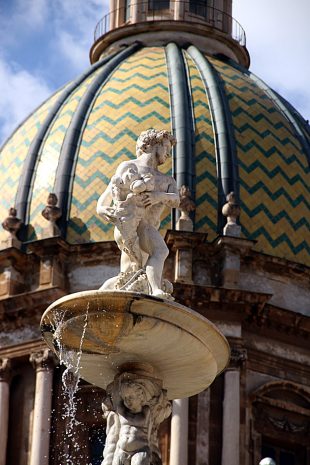 The Florentine Fountain of Piazza Pretoria

One of the most photographed objects in Palermo is the giant, snow-white fountain in the Piazza Pretoria, just southeast of the Quattro Canti. The fountain sits in front of City Hall and has become a symbol of governmental corruption. Disgust with Palermo’s legendary malfeasance, in addition to the fountain’s abundant nudity, are the two reasons that Plaza Pretoria is known among citizens as the Plaza of Shame (Piazza della Vergogna).