We got a late start out of Rome, so stayed the night in a village called Lagonegro, where we realized how much our ignorance of Italian might complicate the next few months. Ordering dinner at the hotel restaurant was an exciting game of a chance for us, and a test of patience for the waiter.

The next morning, we took the A3 highway straight through the province of Calabria to Villa San Giovani, where a ferry spirited us across the Strait of Messina to Sicily. Occupying the southern extreme of the Italian peninsula, Calabria is a beautiful, lushly green region, and the turquoise waters of the Mediterranean were often visible from the highway.

After about twelve hours on Italy’s roads, we’re confident in saying that Italian drivers must be among the world’s most aggressive. They’re not bad drivers, per se, but hilariously rude. Tailgating within inches, incessant honking, passing at ridiculous speeds. We had one guy behind us, flashing his lights and honking, and even making that famous Italian hand gesture which so succinctly expresses aggravation. We moved over at the first chance and he passed us slowly, settling into his preferred speed, which was exactly 1mph faster than we were going. So sorry, signor!

The ferry from the mainland to Messina took about a half hour. A slow approach from the sea was the perfect way to first encounter Sicily. Jutting out spectacularly into the Mediterranean, Messina looked more like an Arabian city than an Italian one. We’d have loved to linger there, but immediately continued on the road to Palermo — due to construction, our journey through Calabria had taken a lot longer than expected, and we were running short of daylight. But despite the hurry, we were compelled to make a few photography pit stops. Castles, seaside villages, mountains and a refreshing absence of human congestion were just some of the hallmarks of our drive. Quite an introduction, and it instilled us with optimism for the next three months. 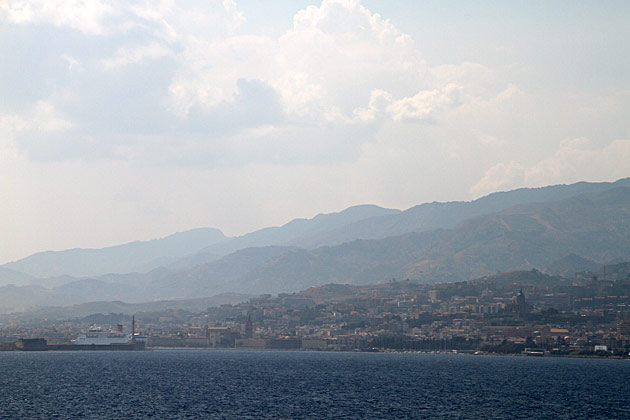